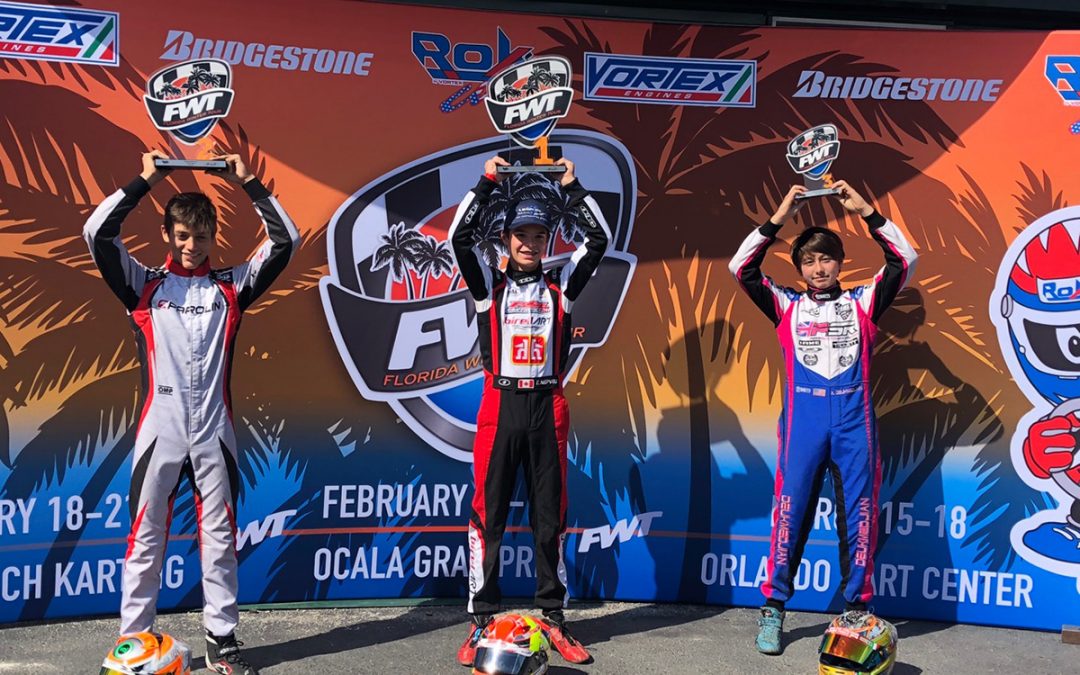 After missing the first round of the ROK Cup Promotions Florida Winter Tour and standing on the podium in round two, Arias Deukmedjian returned to the popular karting series for the third and final round of the program. Taking on the Vortex ROK Junior field at the Orlando Kart Center facility in Orlando, Florida, Deukmedjian overcame a 15th place starting position to stand on the podium on Sunday.

“It was an up and down weekend for me,” explained the Deuk Spine Institute driver. “After qualifying third, I was confident that we could fight for the win but then after some unfortunate heat race results due to no fault of my own, I had to play catch up and salvage the best result I could.”

Advancing forward at the start of heat one, Deukmedjian would take the lead and look to be in contention for the win but on the penultimate lap, was punted from behind and eventually classified in the 19th position. Rebounding in the second heat on Saturday morning, the #200 OTK Tony Kart chassis moved forward from his third place starting position to take the lead and the eventual heat race win. The third and final heat of the weekend on Saturday afternoon was another disappointment as an incident early forced Deukmedjian to retire and to a 30th place finish.

The Merritt Island, Florida resident continued, “Heading into Sunday, my goal was to fight forward as far as I could. Since I was not racing for points or the overall series championship, I reset my goals for the day to try and obtain another podium.”

Lining up 15th for the prefinal, Deukmedjian drove like a seasoned veteran. Taking advantage of on track action and passing karts at will, the Holy Trinity Episcopal Academy honor role student was the hard charger of the prefinal passing more karts than any other driver and set the fastest lap of the race on route to a third place finish. Battling for the lead in the main event, Deukmedjian, an Asian American driver, would hold his own and add another podium result to his growing resume.

Next on the docket for Arias Deukmedjian will be the F4 United States Powered by Honda Championship Series Test at NOLA Motorsports Park on March 31 and April 1.

Be sure to follow Arias Deukmedjian on Facebook, Twitter and Instagram for continues updates and behind the scenes look into his life in both racing and other extra curricular activities. Find him at ‘Arias Deukmedjian’ or @A-Deukmedjian.