Arias Wins Two Back To Back Races in The Superkarts! USA Winter Series 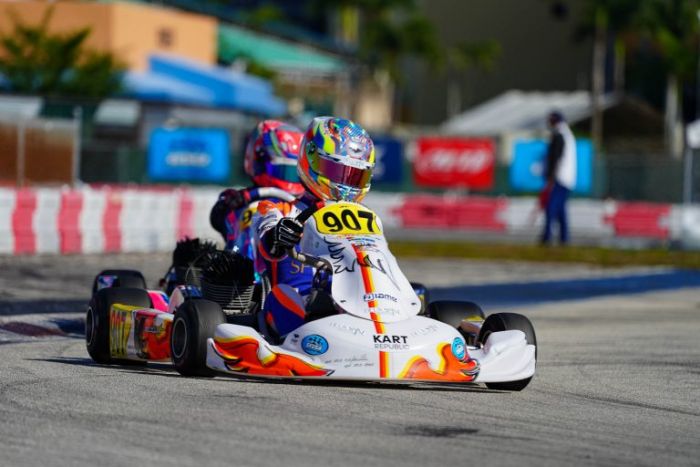 Arias Deukmedjian is once again racing past his competition in the Superkarts! USA Winter Series. His first victory of the day was the KA100 Senior division, followed by a second victory in the Rolison Performance Group X30 Senior class.

Deukmedjian’s first victory on the day came in the Haase Karts KA100 Senior division. Qualifying was the only blemish on his scorecard for the day, missing out on fast time by 17 thousandths with point leader Hannah Greenemeier (RPG / Kosmic) setting the quick lap. Deukmedjian took over the lead on lap 2 of the Prefinal and led to the red flag with two laps remaining. The main event was also cut short by five laps, but Arias led the entire distance until the red flag came out for an incident toward the tail end of the field. Deukmedjian was able to get away to a solid lead early as they battle for the second spot behind him. When the full course caution and red flag came out, Round One winner Brandon Lemke (FMS / Merlin) was in the runner-up spot ahead of Nolan Allison (RPG / Kosmic) and Greenemeier. Aiden Levy (Tony Kart) completed the top-five in the final results.

The second victory for Deukmedjian came in the Rolison Performance Group X30 Senior class. It looked to be shaping up to be the first victory for defending champion Ryan Norberg (RPG / Kosmic) since 2019. Norberg set fast time in qualifying and won the Prefinal by leading every lap. In the Final, he along with Deukmedjian and Diego Ramos (REM / Kosmic) broke away. Norberg led the opening nine laps of the 22-lap final before Deukmedjian took control. From there, Arias was able to pace the trio every circuit to claim his second victory in the category and second win on the day. Norber and Ramos completed the podium with Connor Zilisch (Nitro / Tony Kart) in fourth and Thomas Annunziata (MDR / Tony Kart) fifth.

The second round of the Superkarts! USA Winter Series was run on Sunday under warm temperatures and sunny skies at AMR Homestead-Miami Motorplex in South Florida, and the on-track excitement was high with tremendous racing in virtually every category. Arias Deukmedjian (Kart Republic) further cemented his place as an elite driver in the sport, winning both the X30 Senior and KA100 main events.

The main events at Road America were long, and set up for interesting scenarios as the race played out. For X30 Pro, it was a 26-lap chess game. Some drivers were quick early, including Pauly Massimino (MDR / Kosmic) and Hayden Jones (Nitro / Tony Kart). In the end, it was Arias Deukmedjian (KSNA / Kart Republic) and three-time champion Brandon Jarsocrak (MDR / Kosmic) that paced the field at the end. Deukmedjian took the lead on lap 16, with Jarsocrak on his bumper. Jarsocrak was unable to find a way past on the final circuit, and Deukmedjian, the EKN Driver Rankings #1, drove to his second victory of the season.